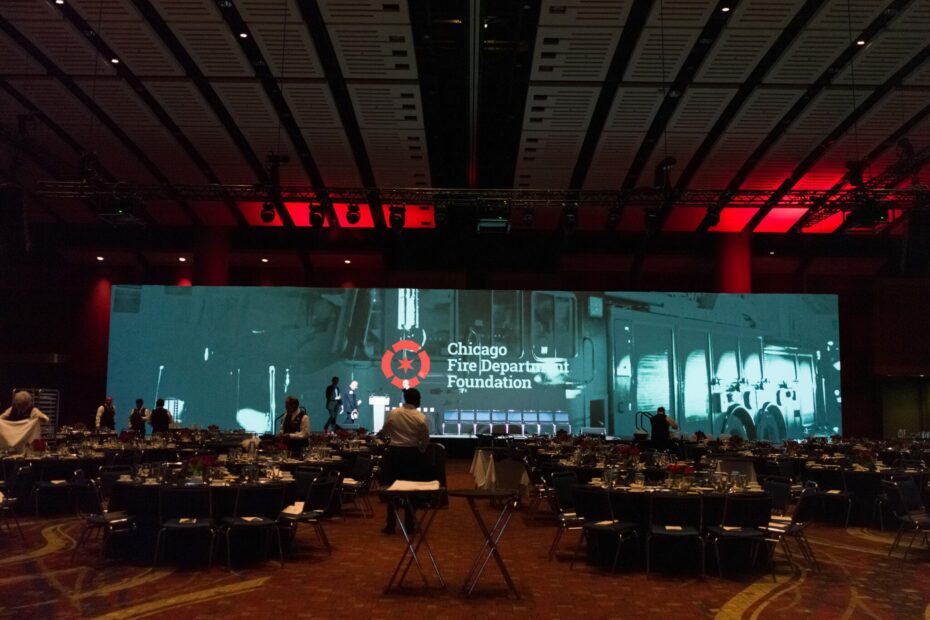 On a hot summer day, fire was reported at 1833 North Kimball. The fire spread with amazing speed taking in three buildings with a 3-11 alarm called to fight the blazes. Lieutenant /EMT John O’Brien and Firefighter/EMT Eric Claudio teamed up to search for victims in the first fire building even before water lines were hooked up to provide cover and suppression. The two crawled into the first floor staying low due to very high heat. Using their hands, they located a victim who was not breathing and appeared to be lifeless. Not ready to give up on this patient they stated aggressive CPR and breathing was restored. After turning the patient over to an ambulance crew, they again entered the building searching for other occupants as crews got water on the fire. These two firefighters entered a building engulfed in heavy fire with no water protection and pushed the limits to locate and save an occupant who was moments away from death from smoke inhalation.

CFD responded to a fire on 130th place with reports of people trapped in the burning building. Lieutenant Thomas Fuchsgruber knew of the reports and went directly into the building to the second floor even before a water line could be established to provide cover and fire suppression. He began to search in high heat and low viability. Finding nothing in the bedrooms, he turned his attention to the bathroom where in the dark he found a 71-year-old woman, he carried her through the darkness and heat outside to a waiting ambulance crew that treated and transported her to Roseland. It was clear the heat and smoke in the bathroom was about to claim the woman’s life but thanks to Lt Fuchsgruber, she was rescued in time to make a complete recovery.

A basement was totally involved in fire with dense smoke spreading to upper floors at 7130 South Fairfield.

Firefighter/EMT James Sewnig and Firefighter William Monaco were searching the floors above the basement. Sewnig discovered a 16-year-old girl in a bedroom but she appeared to be lifeless. Sewnig was joined by Monaco, as they carried her to the front porch and determined that she was not breathing. They started chest compressions as trained and used air from one of the breathing tanks to try and bring her back. They continued to work for what seemed like an eternity but suddenly she responded and began breathing on her own. She underwent several days of specialized care but made a full recovery thanks to the actions of these two firefighters who literally brought her back from the brink of death.

Fire broke out in a home at 1034 North Orleans. Responding crews found heavy fire raging on the first floor with information that people may be trapped on the second floor. Firefighter/EMT Frank Kaufman responded to the second floor despite total darkness and rising temperatures. He crawled and using his hands as eyes searched several rooms finding nothing. As he entered a back room with heat still rising, he felt in the darkness and found a victim. He radioed for help and started to remove the patient. With help from another crew member he made the rescue and EMS crews stabilized the patient for transport with a happy ending.

A young girl called 911 to report that she was hiding in a bathroom with her eight-year-old brother because someone had broken into their home on Hurlbut. Police responded and found two men running with a good head start and hopping a tall fence. Off-duty Firefighter Timothy Sanders saw them coming off the fence and instinctively knew something was wrong, so he gave chase and tackled one offender to the ground while watching where the other one ran. When police caught up, they secured the first offender and based on Sander’s direction, found the second offender hiding under a porch. Sanders exhibited great courage and community concern going into action to assist police with the capture of home invaders.

While returning from an EMS call, Paramedic in Charge Robert Kay and Fire Paramedic Francis Higgins saw a building on fire near Ogden and St. Louis, with no fire equipment on the scene. Upon closer look, they found the entire building was becoming involved. After notifying the alarm office of the fire, the pair entered the smoke-filled building even though they did not have fire gear or breathing tanks. They went to each apartment banging on doors and yelling for people to get out. Their efforts paid off and the entire three-story building was evacuated as the fire spread. As a result of their heroic efforts, many people were able to escape the fire unharmed. An outcome that could have been tragically different had it not been for the bravery of these medics who put personal safety aside to save lives while firefighters were on the way.

Five year-old Sean was tossing a football around with his grandfather when the ball landed on a metal grate that covered a basement window well. Little Sean went to get the ball, but the grate gave way. Sean fell 7 feet down and was impaled on a 30-inch piece of metal rebar. The grandfather jumped into action using his training as a Navy medic by controlling bleeding from the child’s abdomen. Ambulance 6, with Paramedic In Charge Emily Amro and Fire Paramedic Michael Pankovski, arrived and assisted Engine 55 with the delicate extrication, providing care as the child was transported to Laurie Children’s Hospital, where it was found that the bar had missed all vital organs with Sean eventually making a complete recovery. Amro and Pankovski worked closely with fire crews as a unit, to perform the safe extrication and treatment of a child who suffered a possible life-threatening impalement.

On November 19, 2018, Paramedic in Charge Jason Leithner was bringing his patient into the emergency department at Mercy Hospital, along with his partner, Fire Paramedic Debra Kilroe when shots rang out in the parking lot. Moments later, Jason and his partner saw people running into the emergency room along with Chicago police officers as shots continued. Others in the room were evacuating to shelter but with the heavy stretcher the patient could not be accommodated in the move. Faced with the choice of abandoning the patient and running to safety, both Leithner and his partner instantly chose to stay with their patient and sought shelter for all three under a desk. They maintained that position, as the shooter advanced and shots were fired just feet away from them. Despite the impending danger Paramedic in Charge Jason Leithner never abandoned his patient and showed amazing bravery in the face of an active shooter. He showed unwavering dedication to the standards of the Chicago Fire Department and his patient, putting his own safety aside to make sure his patient was protected and reassured.

On November 19, 2018, Fire Paramedic Deborah Kilroe was in the middle of transferring a patient from her ambulance into the emergency department at Mercy Hospital when shots rang out and Chicago Police engaged an active shooter. People started to flee the area but Kilroe still had her patient on a stretcher and had no intention of leaving the area, so with her partner she moved her patient under a table with shots being fired just feet away. Despite the proximity of the gunfire, she remained with her patient under cover until the situation was secure. She exhibited amazing bravery refusing to abandon her patient despite an offender shooting at random victims and police officers. She showed extreme courage in the face of imminent danger well above the call of duty.

Paramedic of the Year, Ambulance Commander Louise A. Fitzpatrick

On November 18, 2018, Ambulance Commander Louise Fitzpatrick was in the Emergency Department of Mercy Hospital completing paperwork when she heard the unmistakable sound of gunshots followed by commotion and screaming. At the same time, her partner came running in, reporting that a man had just shot a doctor and was exchanging gunfire with Chicago Police. Louise Fitzpatrick took cover but secured a landline phone calling the 911 center to inform them of an active shooter situation at the hospital and to hold responding Fire/EMS companies until the situation was safe. Despite many people self-evacuating, Ambulance Commander Louise Fitzpatrick remained and assisted Chicago Police, as they dragged a mortally wounded officer and helped get him onto a stretcher and into the treatment room. She left the building and returned with equipment from her ambulance to assist, along with her partner, in the treatment of Officer Samuel Jimenez. She remained in the ER to assist with treatment of other victims, thus displaying unwavering dedication and commitment to the Chicago Fire Department and those who were in need of aid. Her actions in holding the response of other units potentially save many lives by not allowing responders into the line of fire.

On November 19, 2018, Fire Paramedic Nathan Levek was near his ambulance at Mercy Hospital after transferring a patient to the emergency department. He heard shouting then gunfire from the parking lot and turned to see an offender shooting Dr. Tamera O’Neil multiple times. He saw the offender exchange gunfire with Chicago Police officers. Fire Paramedic Levek then ran into the hospital to warn others the offender was still shooting and was entering the building. Levek and partner Ambulance Commander Louise Fitzpatrick saw police officers dragging a wounded officer down the hallway and they immediately assisted to get him into the emergency room. While many others were running for cover or evacuating, Nathan Levek remained with Mercy doctors and nurses to actively treat Officer Jimenez with advanced life support in an attempt to save his life. He continued that care as the officer was transferred to a waiting ambulance, then returned to the ER to assist other victims. Fire Paramedic Levek put himself at extreme risk to warn others of an active shooter and render aid to a fallen police officer in the middle of a running gun battle. He exemplifies the highest traditions of the Chicago Fire Department in service to the people of our great city.

Five year-old Jayden Espinosa was at a sleepover at a relative’s apartment in the 5000 block of South Marshfield. He was an early riser that morning and was up around 4 a.m. He smelled smoke and then saw fire and quickly alerted his family and then others in the building. In all, 13 people were alerted and were able to get out even before the fire department arrived. The fire did extensive damage and had it not been for the quick efforts of this little boy, this blaze may have resulted in multiple fatalities. Jayden comes from a police family but made it clear he wants to be a firefighter when he grows up!