Mr. Price was recognized for his unwavering commitment to the Safety of Chicago’s residents and his years of support to the Firefighters and Paramedics of the Chicago Fire Department.

Mesirow has an over 80-year history of giving back to the Community.  They are true leaders in philanthropy in our City and beyond, supporting a wide range of organizations and causes. 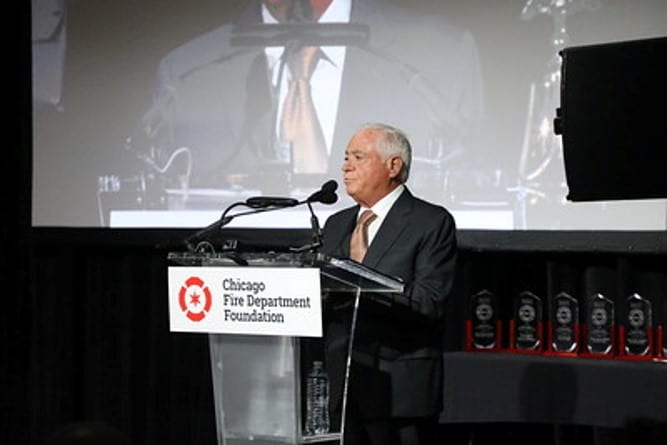 FIREFIGHTER OF THE YEAR

On the evening of January 6th, at 6:30 pm, Engine 109 and Truck 32 responded to a ﬁre at 2518 South Homan Avenue. A multi-unit apartment building was ﬁlled with heavy smoke and ﬁre. Truck 32 ﬁreﬁghter Richard Drabik noticed a civilian leaning halfway out the 2nd ﬂoor window desperately waving for help as heavy smoke pushed from behind, venting out around him. FF Drabik yelled to his roof operations partner, FF Pae, to grab a ground ladder as they jumped off the truck. The victim was now hanging out of the second-ﬂoor window clinging to the edge of the windowsill, with the heat and smoke pouring out above his head. FF Drabik immediately raised the ladder and then raced up through the heavy smoke and ﬁre conditions to reach the victim and complete the rescue as the victim could no longer hang on to the windowsill. FF Drabik carried the victim to safety down the ladder under very heavy smoke and heat conditions.

FF Drabik’s situational awareness upon arrival and his swift, courageous actions saved this civilian from serious burns and injury. Fireﬁghter EMT Richard Drabik performed this heroic act in the highest tradition of the Chicago Fire Department and is presented with the 2022 Fireﬁghter of the Year Award. 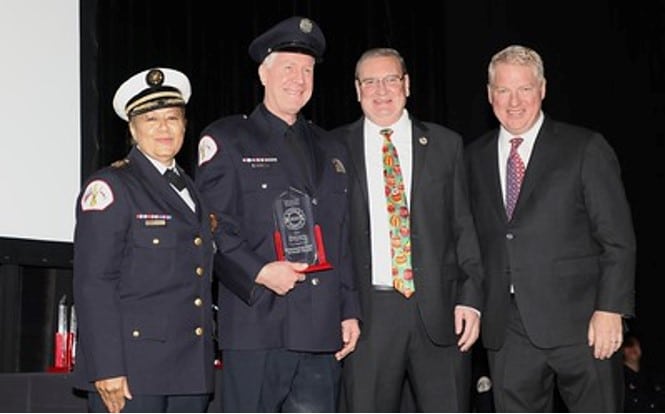 PARAMEDIC OF THE YEAR

On June 27th at 10:30 pm, Ambulance 49 crew members Paramedic in Charge Regina Sojka and Fire Paramedic Rebecca Sheely were dispatched to 63rd and Western Avenue for a traﬃc accident supported by Truck 41. Upon their arrival, PIC Sojka and FPM Sheely quickly assessed the scene and requested two more ambulances. At this point, PIC Sojka and FPM Sheely had triaged all three patients when suddenly multiple gun shots erupted at the scene. CFD personnel immediately sought cover from the gun shots. PIC Sojka, with no concern for her own personal safety, began directing bystanders who were in the line of ﬁre to run to the ambulance for cover. All members and civilian bystanders on the scene attempted to take cover until the gun ﬁre ceased. While the gun ﬁre was happening, FPM Sheely was attending to one of the severely injured victims from the car crash on the ground that had no chance to take cover. The severely injured woman was exposed to the dangerous situation at hand, which prompted her boyfriend to run over to try and help protect her. Quickly, and unselﬁshly, FPM Sheely covered both the patient and her boyfriend with her own body, wrapping her arms around both of them, to shield them from the gun ﬁre. PIC Sojka and FPM Sheely continued to triage and stabilize those injured from the car accident and subsequent shooting.

PIC Sojka and FPM Sheely disregarded their own personal safety by placing themselves in the line of ﬁre to protect the civilians on the scene. Paramedic in Charge Regina Sojka and Fire Paramedic Rebecca Sheely performed these heroic acts in the highest tradition of the Chicago Fire Department and each are presented with the 2022 Paramedic of the Year Award. 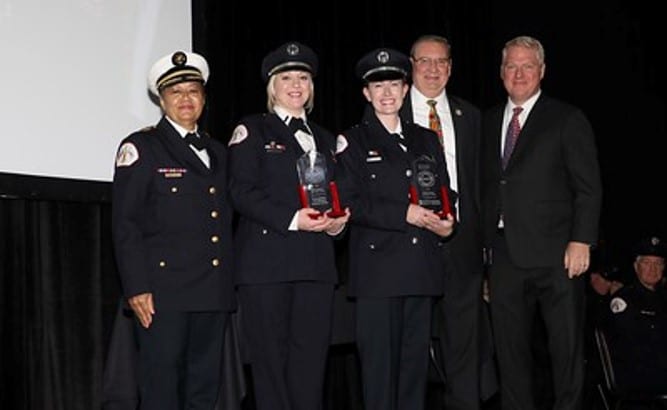 On April 4th at midnight, Engine 96 and Truck 29 responded to ﬁre at 551 North Central Avenue. A 3-story apartment building with heavy smoke and ﬁre on the ﬁrst ﬂoor. The ﬁre was quickly spreading to the upper ﬂoors. While Engine Co. 96 attacked the ﬁre, Truck 29 raised their aerial ladder while their Interior Search Team, led by Lt. Paul Burns, entered the structure to begin searching for victims. The team quickly discovered an elderly woman who made it to the front door of her apartment but collapsed, unable to go any further. Lt. Burns along with FF Michael Modjeski and FF Jeffrey Rich removed the woman to the exterior of the building and secured the apartment door to prevent the movement of the ﬁre up the stairwell. The victim was then able to tell them that other family members were still inside the apartment. As they quickly re-entered to continue their search, they encountered heavy ﬁre conditions with zero visibility. Engine 96 aggressively attacked the ﬁre, holding it at bay and allowing Truck 29’s team to enter the unit and search for more victims. With zero visibility and extreme heat, Truck 29’s team pushed forward. Within moments, FF Modjeski called to FF Rich and Lt. Burns that he located an unresponsive woman in bed and needed assistance getting her out. FF Modjeski and FF Rich quickly removed the victim down the hallway to the exterior of the structure. Lt. Burns was now alone in the apartment continuing to search. Entering a bedroom on his hands and knees, Lt. Burns discovered an unconscious baby under debris. He immediately protected the child and moved them outside. Both victims were passed off to CFD EMS members who initiated life-saving CPR measures. All three victims were then quickly transported to the hospital.

Lt.Burns, FF Modjeski, and FF Rich performed these rescues without regard to their own safety and without the protection of a hose line under heavy smoke conditions and extreme heat. Lieutenant Paul Burns, Fireﬁghter Paramedic Michael Modjeski, and Fireﬁghter EMT Jeffrey Rich performed these heroic acts in the highest tradition of the Chicago Fire Department and each are presented with the 2022 Fireﬁghter Award of Valor. 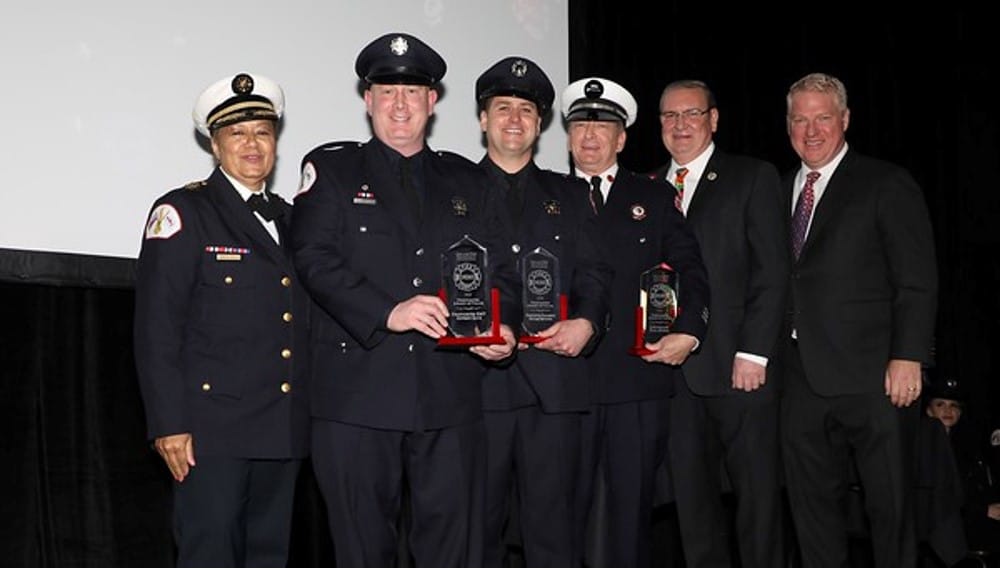 On April 3rd at 1:15 pm in the afternoon, Ambulance 27 responded to a call of a psychiatric emergency at 4260 West Ford City Drive. Paramedic in Charge Tomasz Dubert and Fire Paramedic Megan Staatz entered the ﬁrst ﬂoor of the apartment building. As they were walking up the stairs to the second ﬂoor, gunshots were ﬁred from what appeared to be inside the apartment they were responding to. In a moment, a woman came out staggering from the front door of the apartment with a gunshot wound to the neck. Knowing that they had to act quickly to have any possibility of saving her, PIC Dubert and FPM Staatz used a wall to shield themselves from the gunshots and the shooter. They momentarily exposed themselves to possible gun ﬁre and quickly grabbed the victim out of the line of ﬁre to a safe area in the hallway to initiate trauma care for the gunshot wound. The injured woman told them the shooter was inside the apartment and other people inside had been shot. PIC Dubert and FPM Staatz notiﬁed CPD oﬃcers, who were coming into the building, of the dangerous current situation. In the midst of the chaos, PIC Dubert and FPM Staatz continued to provide patient care under extremely dangerous conditions as the incident rapidly escalated to a full CPD SWAT hostage/barricade response. PIC Dubert and FPM Staatz maintained communications with CPD and assisted with immediately transferring care of the injured woman over to the ﬁrst arriving additional ambulance for transport to a trauma center. Ambulance 27 continued to work the scene and perform patient triage and primary care.

What started as a seemingly typical call, quickly became a life threatening and dangerous situation. Despite the risks, and active gun ﬁre, PIC Dubert and FPM Staatz continued to perform their duties without regard for their own safety. Paramedic in Charge Thomas Dubert and Fire Paramedic Megan Staatz performed these heroic acts in the highest tradition of the Chicago Fire Department and each are presented with the 2022 Paramedic Award of Valor. 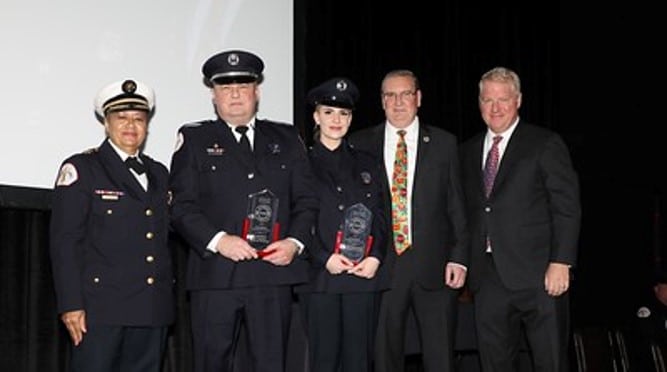